Navigation in The Atrocity Exhibition

J.G. Ballard is most infamous for the edgy content of his most famous books. Empty swimming pools, car crash pervs and low flying air planes. But he was also — as were most writers coming up off Burroughs’s fumes — big on edgy structure. The most notable example outside his short stories, is his classic The Atrocity Exhibition. This is a mega-work, and shows Ballard pushing against the boundaries of printed media and touching on aspects of digital stories to come.

Here’s Ballard introducing the book in a 2001 edition: 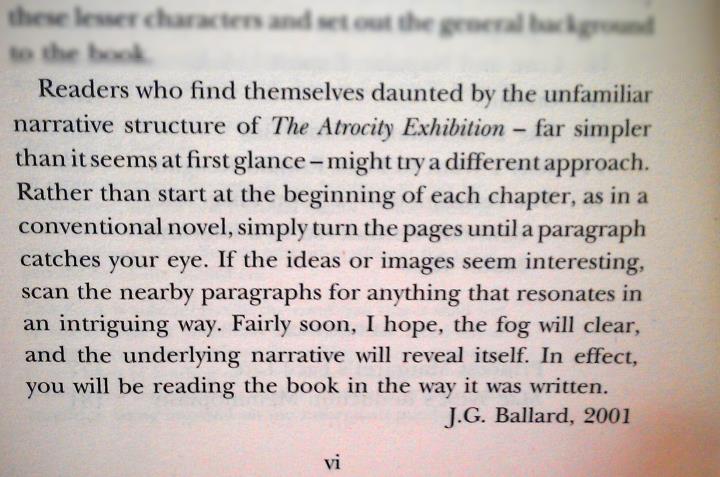 I love the way this book is structured: a smörgåsbord of bite sized chunks with bolded titles. As Ballard suggests, you shouldn’t read the chunks in order but can browse and dip in and out as you desire. As you turn pages and let your eyes scan over it, it’s the bolded titles that most grab your attention — allowing you to rapidly appraise the larger text via this embedded index. The titles are thematic and varied and so it can feel like you’re navigating the book by free associating the imagery and ideas it contains. 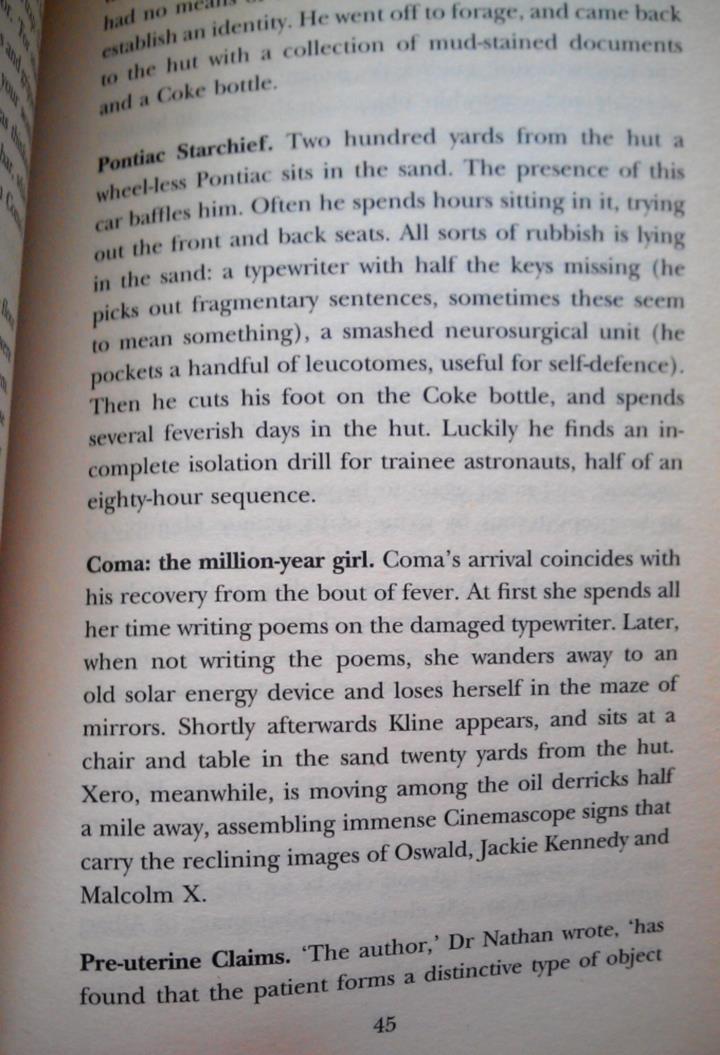 What Ballard gives us is somewhat free navigation of the text, but he also gives us a means to navigate it more usefully — a means that is embedded and part of the story’s themes and text. As we navigate we are personally responding to the text and interacting with it.

What Ballard’s text can’t do is escape its physical form. It can’t avoid the linearity of its being printed on pages, arranged in order and sandwiched between two covers. A digital story however — it has no covers and so can orientate itself depending on the direction the player approaches it from.

A Story as a Card Game

Ballard’s short story The Beach Murders presents itself as a series of alphabetized story chunks (again, with key index titles) and suggests the reader treat it like a card game– 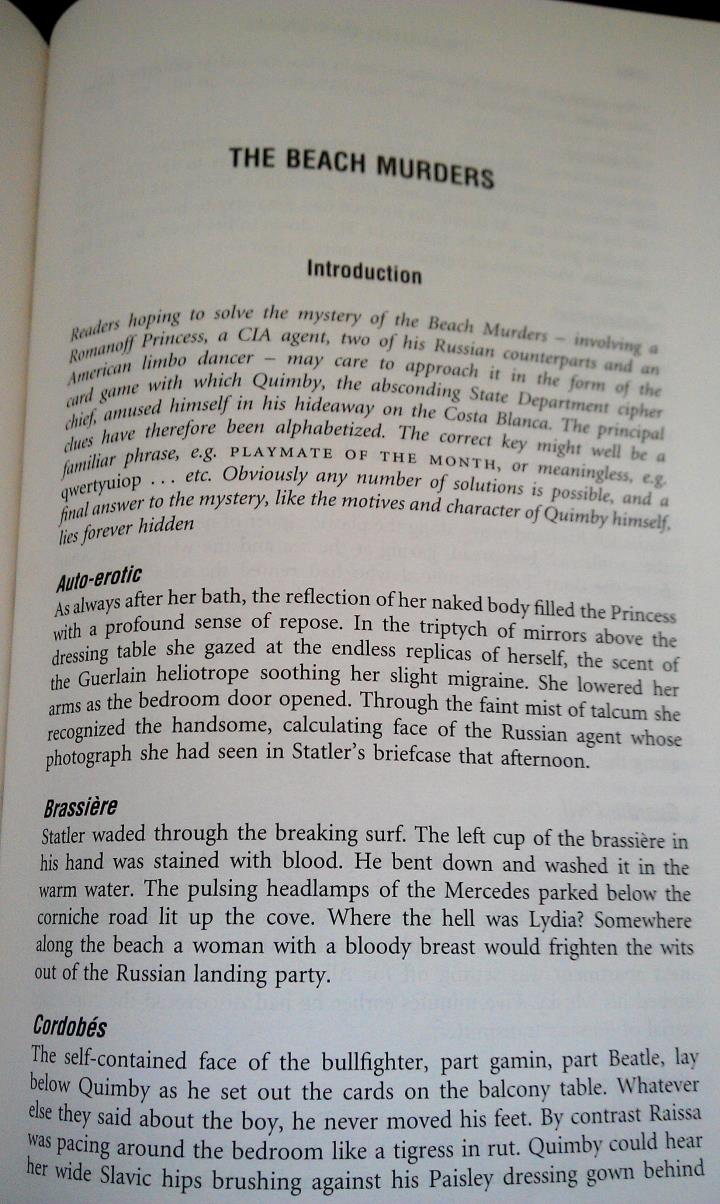 Indeed if we printed the chunks out as cards and shuffled them, we would escape the bounded-ness of the book covers and their imposition of linearity. However we would still be holding the entire work in our hands — it could hide no secrets from us. All traditional media are like this: sit in a movie theatre until the lights come up and you have seen all of the movie. Read a book cover to cover, you’ve seen it all. One of the most unique aspects of a digital story is that it can easily hide itself from the player, revealing itself as the interaction progresses. We can have the sense of a story as an iceberg — seeing only the tip, we are aware of a rich, unseen mass below the surface. Our interactions are magical incantations that draw up pieces of the story.

This was a sensation that was evoked simply in my 1999 game Aisle. The game presented the tip: an opening few paragraphs describing a situation (a man in a supermarket aisle) and then asked the player to move things forward by typing some words at the flashing command prompt. Giving the character orders would enact them and reveal a story chunk that would finish off the story. Then the game restarted. The player could try different actions to uncover more chunks — that may or may not cast more light on one or two core stories. There were 136 unique chunks to find and most players would only see half of those — so there was always more to discover, always a chance that the next cast would catch and you’d haul up something glittering.

Stories Made of Data

One way for a traditional story to escape its physical bounds is to place the story outside the text — relying on the reader’s imagination to create it. Ballard explored some of these techniques is a number of stories, e.g. Notes Towards Mental Breakdown (a series of footnotes to a text we never see) and Answers to a Questionnaire (answers, but no questions). Most brilliantly — and hilariously — this is explored in The Index. This story gives us the index to a biography — but none of the rest of the text. Again, the reader is encouraged to browse and be drawn to names/words/ideas and connect dots, create the story from what Ballard has created — essentially the crime scene, rather than the crime. 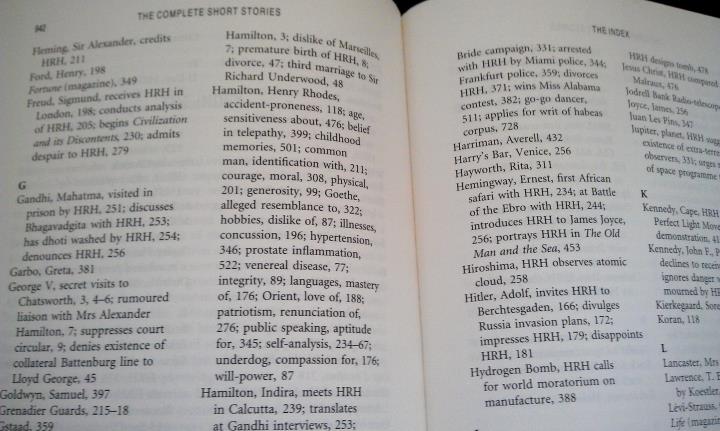 Computers are utilized to record and collect databases of information — the same one-sided collection of isolated entries and data that Ballard recreates in these stories. When I worked at the company Microstrategy as a youngster I got to play with terrabyte databases of supermarket sales data and was amazed at how readily one could summon up narratives from the patterns and footprints of customers. Exploring these stories felt like experiencing authentic digital narratives — multi-dimensional, non-linear portraits captured through the digital shadows cast by real life. The act of mining out these stories felt invigorating — I was part reader, part author, part interactor. This was a way of invoking a digital story, not by making me play act the main character — but by re-conceiving the role of the reader/audience and making me a digital detective.

Some games have taken this concept as a frame for their stories (e.g. the 1986 Portal ) but this is frequently just a frame and/or an atmospheric effect — the actual act of interacting with the database is the same bread-crumb following that the majority of games use to deliver their fragmented narratives. Even when this results in a non-linear delivery of story chunks this is usually to a scripted plan that actually creates a very linear story for the player in terms of how the author wants the story to unfold.

With HER STORY I’m trying to create a magical digital iceberg. A story that is presented in a digital way, that can be navigated via free-association and interaction with the story itself. I want you to explore the story rather than exploring something else whilst story is dropped in your lap.